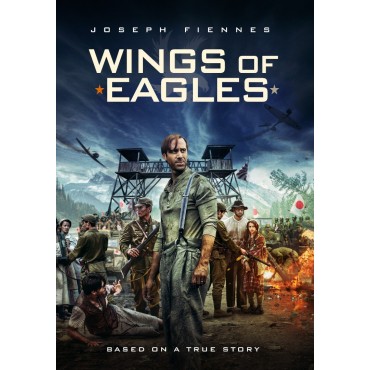 Wings of Eagles is the amazing story of 1924 Olympic Gold-medalist Eric Liddell, a Scottish man who felt the call of God to be a missionary and teach in China. But it would not be without cost. After the Olympics, Liddell made the journey back to China to teach, despite the raging war and cruelty of the Japanese soldiers. This film is about endurance and, especially, hope, which is the central theme of the film. Liddell undergoes cruelty at the hands of the soldiers and watches others undergo the same treatment. His great victory at the summer Paris Olympics was quite a contrast to what happened to him during World War 2. We see Liddell with his wife and daughters early in the film, and while he is away, she delivers a third daughter. He is sorry to leave them to go teach, not realizing the captivity that awaits him and others. He is captured while performing a wedding ceremony when soldiers show up at the church and halt the wedding. In one scene, Liddell, nearly starved, is forced to race against a Japanese soldier when he falters and falls. Later, in order to secure medicine for a man that is dying, he agrees to race again. He wins this time, but the medicine is withheld from the man anyway. To make things worse, a young boy, who was bringing the medicine while the electrical fence was turned off, is electrocuted when the cruel commander orders it back on, knowing full well the boy is scaling the fence at that very moment. Joseph Fiennes gives an excellent performance as Liddell. The story, rich in character development, is based on true events. This movie will have the viewer upset at the treatment of the characters and then admiring them for their perseverance. Eric, also known as the Flying Scotsman, is now commemorated in a monument in China featuring these words from Isaiah: “They shall mount up with wings as eagles, they shall run and not be weary.” The hope that Eric Liddell held onto is what enabled him to deal with incredible suffering. What a message this movie contains! We are pleased to award it our Faith-Friendly Seal for ages 12+

Be the first to review “Wings Of Eagles” Cancel reply