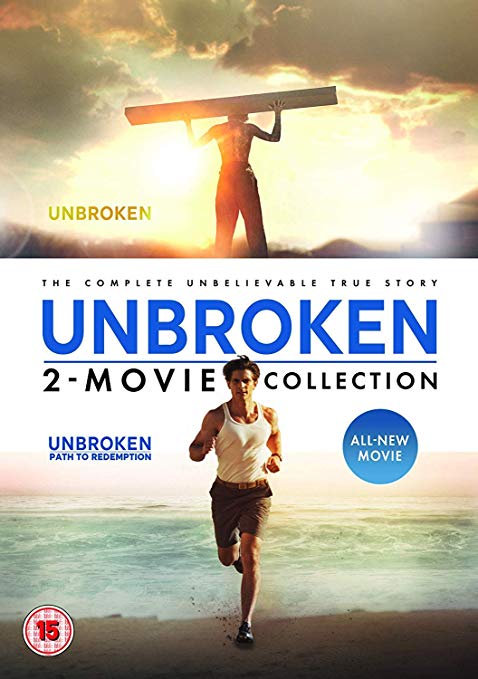 Unbroken Academy Award® winner Angelina Jolie directs and produces this epic drama that follows the incredible life of Olympian and war hero Louis “Louie” Zamperini (Jack O’Connell) who, along with two other crewmen, survived on a raft for 47 days after a near-fatal plane crash in WWII – only to be caught by the Japanese navy and sent to a prisoner-of-war camp. Adapted from Laura Hillenbrand’s (Seabiscuit: An American Legend) enormously popular book, it’s the inspiring true story about the resilient power of the human spirit.

Unbroken: Path to Redemption After surviving a plane crash, weeks of floating on a makeshift raft in the Pacific, and then years of torture as a prisoner of war, Louis Zamperini finally returns home to California, seemingly unbroken. When the war ended, his battle began. Based on Laura Hillenbrand’s bestselling book, UNBROKEN: PATH TO REDEMPTION begins where the hit movie Unbroken concludes, continuing the unbelievable true story of this Olympian and World War II hero. Haunted by nightmares of his torment, Louie sees himself as anything but a hero. Despite battling demons, anger, and alcohol abuse, Louie feels obligated to participate in an Army tour to raise money for War Bonds. But he ends up focusing more on hotel bars than his public appearances, so Louie is eventually ordered to take R&R on the beaches of Miami. There, he meets Cynthia, a young woman who captures his eye – and his heart. After a whirlwind courtship, the couple marries and moves to Los Angeles. While pursuing every avenue of hope he can find – from trying to reestablish himself as a world-class runner to get-rich-quick investment opportunities – Louie’s wrathful quest for revenge drives him deeper into despair…and the bottle. Hopeless and on the brink of divorce, Cynthia experiences Billy Graham’s 1949 Los Angeles Crusade where she finds faith in God and a renewed commitment to her marriage and her husband. Now, her most fervent prayer is for God to help Louie find the peace and forgiveness he so desperately needs. From the producer of Unbroken and the screenwriter of A River Runs Through It, UNBROKEN: PATH TO REDEMPTION stars Samuel Hunt (Louis), Merritt Patterson (Cynthia), David Sakurai (Watanabe, “The Bird”), Gary Cole (Dr. Bailey), and Will Graham as his grandfather, Billy Graham. UNBROKEN: PATH TO REDEMPTION brings to life the rest of Louie Zamperini’s powerful real-life story of forgiveness, redemption, and amazing grace.

Be the first to review “Unbroken – 2 Movie Collection” Cancel reply