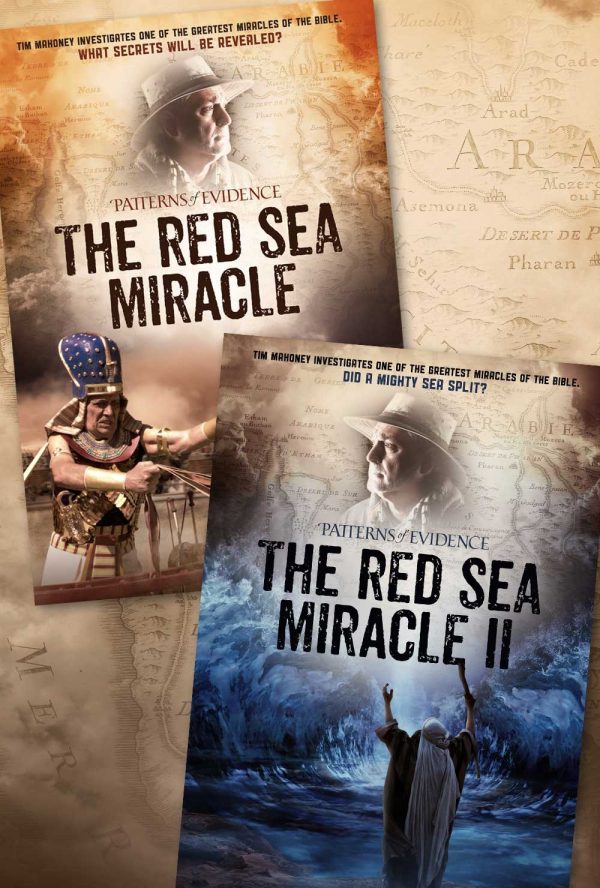 Get both Red Sea Miracle documentary films together.

THE RED SEA MIRACLE is the first in a two-part film series by Patterns of Evidence’s award-winning filmmaker, Timothy Mahoney. In this investigation he examines the journey to the crossing location, looking at two competing views of the Red Sea Miracle. One he calls the “Egyptian Approach,” which looks near Egypt. The other he calls the “Hebrew Approach,” which looks far from Egypt to the Gulf of Aqaba where divers have been searching for the remains of Pharaoh’s army on the seafloor. The investigation raises giant questions about the real location for the crossing site and its implications on your view of God. The answers to these questions point to one of two very different realities.

Join Timothy Mahoney as he retraces the steps of Moses and the Israelites, looking for answers. As he investigates the possible locations he interviews top-level secular and biblical scholars in search for clues that support the Bible’s timeline for this pivotal event in history. Now, see the evidence as the Bible comes alive with dramatic recreations, 3D animations and never seen before footage.

THE RED SEA MIRACLE 2 continues to raise big questions about biblical miracles.  Introducing the second film in a new two-part series by Patterns of Evidence’s award-winning filmmaker, Timothy Mahoney. How could thousands of feet of water be parted at the Red Sea? Or was the sea merely parted by the act of wind in nature, through a shallow Egyptian lake? Mahoney investigates these locations to see if any have a pattern of evidence matching the Bible. People of faith will be inspired and skeptics will have much to think about as Mahoney reveals two decades of documentary research including if divers found the remains of Pharaoh’s army on the seafloor.  This cinematic journey leads him to inquire… “Do miracles still happen today?”