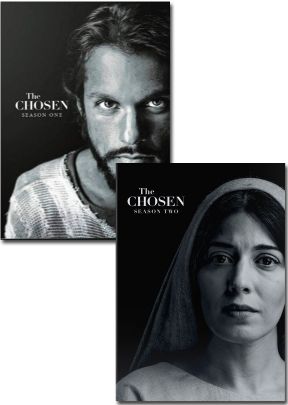 This four-disc set includes all 16 episodes from seasons one and two of The Chosen.

THE CHOSEN: SEASON ONE
A charismatic fisherman drowning in debt. A troubled woman wrestling with real demons. A gifted publican ostracized by his family and his people. A religious leader struggling with his beliefs. In this ground-breaking first season of The Chosen see how Jesus reaches each of these and more as He works His first miracles and embarks on His ministry to change the world. See Him through the eyes of those who met Him. The Chosen is the #1 crowdfunded media project in entertainment history and the first multi-season show about the life of Jesus Christ and His disciples. This two-disc DVD set features all 8 episodes of Season One, The Shepherd Pilot Episode, and a special message from the director. Starring Shahar Isaac, Jonathan Roumie, and Paras Patel.

THE CHOSEN: SEASON TWO
The word is spreading that Jesus is the Messiah. Increased fame brings growing crowds, new disciples, and more miracles. It also brings trouble. Mary is confronted with old demons. The tension between Simon and Matthew explodes. James and John battle their prejudices and fiery tempers. But they all continue to passionately pursue the man they don’t always understand but will always follow. Includes eight episodes on two discs.