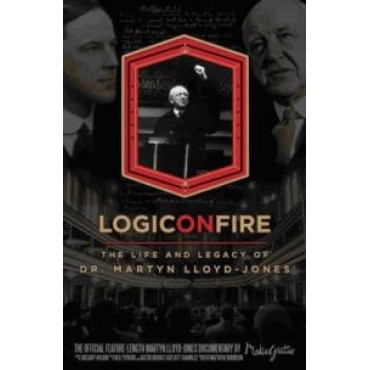 Logic on Fire: Life and Legacy of Dr Martyn Lloyd-Jones

Logic on Fire is a feature-length documentary with over 4.5 hours of special features, a 128-page book, and much more. More than simply a recounting of the man’s life, Logic on Fire examines Lloyd-Jones’s home life, his spiritual influences, the emphasis he brought to his two pastorates, the way he sought a union of “logic” and “fire” in preaching, as well as his continued relevance and influence in evangelicalism today. Logic on Fire emphasizes not only the need for clarity in preaching, tenderness in pastoring, and carefulness in worship, but also a humble dependence upon God to make the work of the ministry effective.

‘Logic on Fire has moved me deeply and I do believe that it will do untold good across the earth. I never expected to see such a visual record in my lifetime; had it not been done until some later date it could not have been the same. The professional presentation, the wise selection, the spiritual insight, and other things, are just so well done. I think my wife was giving it the highest praise when she said, “the Doctor would have approved of it”. I believe the men at Media Gratiae were helped and guided by the Saviour whom they have sought to honour. The film has all the marks of a spiritual ministry of very lasting value which will help far more people than we will ever know!’ — IAIN MURRAY

‘Media Gratiae has made a film that all of Dr. Lloyd-Jones’s family can be proud of. We could not be more grateful.’ — JONATHAN CATHERWOOD, grandson of Dr. Martyn Lloyd-Jones and President of the MLJ Trust.

Dr. John Snyder uses the example of Dr. Martyn Lloyd-Jones’ ministry to illustrate the “Beholding God: Avoiding the Lies of Pragmatism.” Media Gratiae’s Behold Your God: Rethinking God Biblically is a 12-week multimedia Bible study led by Dr. John Snyder that focuses on God’s self-revelation in the Bible, helping the believer to apply the descriptions of God to all of life.

Thoughts on the score by soundtrack artist Gregory Wilbur

Be the first to review “Logic on Fire: Life and Legacy of Dr Martyn Lloyd-Jones” Cancel reply