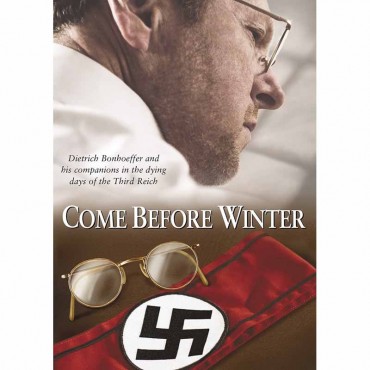 Dietrich Bonhoeffer And His Companions
In The Dying Gasps Of The Third Reich.

Filmed on the Baltic island of Rügen, in Berlin, Buchenwald, Flossenbürg and various locations in England and the United States, this docudrama lifts the curtain on cruel ironies of the last weeks of World War II in Europe and tracks two longtime foes of Adolf Hitler, virtuoso propagandist Sefton Delmer and iconoclastic pastor Dietrich Bonhoeffer.

Join VIP prisoner Bonhoeffer dancing in a converted schoolhouse in Bavaria with the fragrance of freedom in the air. Among his improbable prisoner-companions are Vassili Kokorin, nephew of the Soviet Foreign Minister Molotov, Fey von Hassell, daughter of a key leader of the German resistance and Captain Payne Best, imperious MI6 officer who has somehow survived five years of Nazi concentration camps.

An equally improbable collection of characters gathers daily at a super-secret location outside London. A young woman, a Jewish refugee hired as a teenager, mans the microphone and the most powerful radio transmitter in the world launches gossip, jazz, news and lies into German occupied Europe. Leading this disinformation team is newspaperman Sefton Delmer. Assisting him in production are a dear friend of the Bonhoeffer family, Dr. Otto John (whom history has proved the personification of the saying “a riddle wrapped in a mystery inside an enigma”) and Ian Fleming (yes, the same).

What are Dietrich Bonhoeffer and the creator of James Bond doing in the same story?

And what is Bonhoeffer family friend Otto John doing sitting in a West German dungeon year after year during the cold war? Wasn’t he the head of the country’s FBI? And before that a purveyor of the bawdiest and most fallacious British wartime propaganda imaginable? And before that one of Germany’s noble traitors?

After years of admiring Dietrich Bonhoeffer, Minnesota psychiatrist Gary Blount and German filmmaker Hellmut Schlingensiepen team up with California director and film editor Kevin Ekvall (I’m Not Leaving, 2014) to share the view from below. Entrusted with enormous resources including money, talent and the most powerful radio transmitter in the world, their newspaperman storyteller, Sefton Delmer, occasionally “transcends the facts.”

Be the first to review “Come Before Winter” Cancel reply