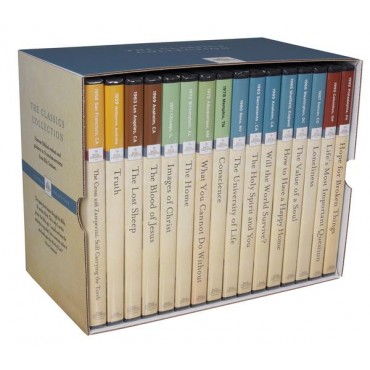 These uplifting TV specials – originally preached in stadiums around the world – have offered the hope found only in Jesus Christ to millions of people. This set features powerful Biblical teaching from Billy Graham in each message, plus appearances from special guests including Billy’s wife, Ruth Bell Graham. Sermon topics include family life, loneliness, the Holy Spirit, and more. This complete set includes 16 of Billy Graham’s classic sermons ranging from the 1950’s all the way through the 1990’s.

The Cross with Zamperini: San Francisco in 1958

The Blood of Jesus: Southern California Crusade in 1969

Images of Christ JCS: Chicago in 1971

What You Cannot Do Without: Albuquerque in 1975

Will the World Survive: California in 1985

Hope for Broken Things: Philadelphia in 1992

Life’s Most Important Question: Columbus in 1993