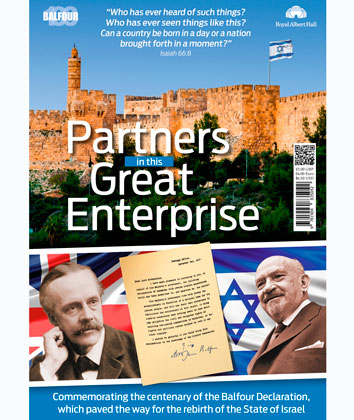 Balfour 100 – Partners in this Great Enterprise

A brilliant souvenir magazine commemorating the centenary of the Balfour Declaration, which paved the way for the rebirth of the State of Israel.

Highly-readable and inspiring articles from numerous expert contributors are carefully crafted by the editor, Roy Thurley, into a single running narrative of how the Balfour Declaration helped the Jewish people recover their historic homeland in Palestine.

Beginning with Martin Luther nailing his 95 theses to the church door in Wittenberg on 31 October 1517, the story is told of how God’s promise to his historic people was recognised and pursued by Jews and Christians alike until the momentous Balfour Declaration by the British Government 100 years ago. But the story doesn’t end there… ongoing partnerships between Christians and Jews continue to play a significant part in this unfolding modern miracle