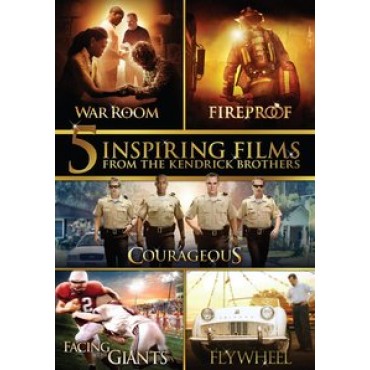 War Room: From the award-winning creators of Fireproof and Courageous comes WAR ROOM, a compelling drama with humour and heart that became the #1 movie in US theatres and received raving reviews from audiences of all ages. Tony and Elizabeth Jordan have it all-great jobs, a beautiful daughter, and their dream house. But appearances can be deceiving. Their world is actually crumbling under the strain of a failing marriage. While Tony basks in his professional success and flirts with temptation, Elizabeth resigns herself to increasing bitterness. But their lives take an unexpected turn when Elizabeth meets her newest client, Miss Clara, and is challenged to establish a ‘war room’ and a battle plan of prayer for her family. As Elizabeth tries to fight for her family, Tony’s hidden struggles come to light. Tony must decide if he will make amends with his family and prove Miss Clara’s wisdom that victories don’t come by accident.

Fireproof: Kirk Cameron (Left Behind) stars as Caleb Holt, a heroic fire captain who values dedication and service to others above all else. But the most important partnership in his life, his marriage, is about to go up in smoke. This gripping story follows one man’s desire to transform his life and marriage through the healing power of faith and fully embrace the fireman’s code: Never Leave Your Partner Behind.

Courageous: As law enforcement officers, Adam Mitchell, Nathan Hayes and their partners willingly stand up to the worst the world can offer, yet at the end of the day, they face a challenge that none of them are truly prepared to tackle: fatherhood. While they consistently give their best on the job, they quickly discover that their children are beginning to drift further away from them. When tragedy hits home, these men are left with a newfound urgency to renew their faith and reach out to their own children. Will they be able to find a way to serve and protect those who are most dear to them?

Facing The Giants: In six years of coaching, Grant Taylor has never led his Shiloh Eagles to a winning season. After learning that he and his wife Brooke face infertility, Grant discovers that a group of fathers are secretly organising to have him dismissed as head coach. Devastated by his circumstances, he cries out to God in desperation. When Grant receives a message from an unexpected visitor, he searches for a stronger purpose for his football team. He dares to challenge his players to believe God for the impossible on and off the field. When faced with unbelievable odds, the Eagles must step up to their greatest test of strength and courage.

Flywheel: Jay Austin wants to sell you a used car, but watch out! Many victims have fallen prey to his smiling face and hasty promises. Austin does everything his way until his dishonesty and manipulation are repeatedly exposed. Like many men, the masks he wears and lies he tells disgust him. While having a classic convertible repaired, Austin begins a humorous and inspiring journey to win back the hearts of his wife, his son and his community. In every man’s life, there can be a turning point. When Jay Austin makes his turn, he never looks back.

10 in stock (can be backordered)

Be the first to review “5 Inspiring Films” Cancel reply